I had the most delightful dream, it’s a bit recurring, but this time it was different.

I have a standing offer with a “neighbor” to visit his “backyard” whenever I want. I prefer to do it when he’s not around, so after he went inside, I headed over. He came back outside after I got there so I ducked down, but he saw me. I made like I fell down. Not sure why… but he came over to help me up.

He reached out his hand and I stood up, but he was so tall.. or something, that I didn’t feel like I was standing, so I jumped. LOL. I was standing already.

Then, he took me to his special, indoor entrance to his backyard. (This is the new part). He had this big bay window with sliding glass doors to this gorgeous landscape. Near the door were huge rocks (not Kansas, not Oklahoma and not even Colorado colored, but rock color all the same). It was about a 3 foot drop, but there was also a rock near that was like a stepping stone. Beyond the rocks was a huge, blue, sparkling lake, evergreen trees and mountains. Magnificent. 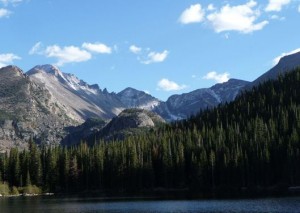 I accidentally let the dogs out as I was overtaken by the breathtaking beauty. I apologized. He looked sad but was not upset. (I messed up at least twice, but I don’t remember what else I did… I just know that I’d made “mistakes”)

I stepped thru the door (portal?) and into the glory. Less than 10 feet away, in some trees (and the trees were still somewhat bare like now, with the leaves just starting to grow back) were wild Mustangs. All different colors. Black, brown, red… no whites or greys tho. There were at least 8-10 of them.

I pulled out my cellphone (LOL!) and took pictures. I don’t know if the pix came out, but I didn’t care.

Then I lost track of time for a long time, just taking everything in and replenishing my soul.

Finally, it was time to go back in. I called the dogs to me and they had to jump up the 3 feet because they were no longer on the rocks. The first one was younger (reminded me of my old roomies dog) and had no problem, but the other was a German Shephard, just like my Lightning, and it took him 2 tries because he had bad back legs / hips like Shepherds do. Once he made it in, you could tell he was hurting, poor guy.

I believe I said or thought or felt a “thank you” and then I woke up.

Basecode of my universe…