Quan Yin and me – the beginnings

Everything happens in its own time. Boy do I believe that.
A little less than 7 years ago, I had my portrait painted by Intuitive Portraits by Michelle Mauler
It was gorgeous and spoke to me in so many ways.. but one way I was confused.
Quan Yin was part of the art… and I was unfamiliar with her. 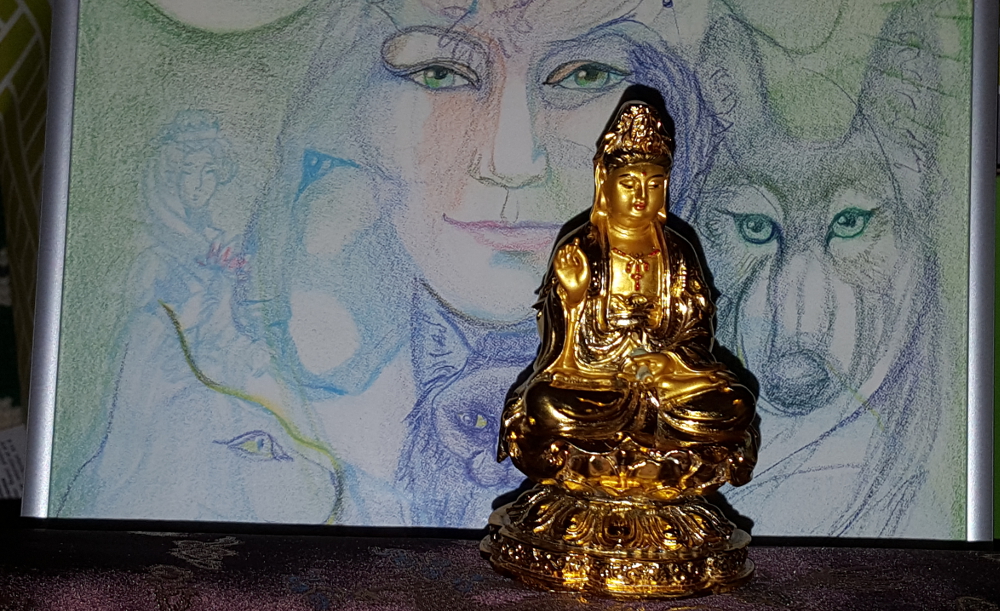 For the past 6 years, I’ve looked for something to represent Quan Yin in my yoga room(s). I came close.. once.. but.. it wasn’t the time.. It didn’t speak to me.. I didn’t even RECOGNIZE her as Quan Yin.. until much much later.. SO weird.

And then, yesterday, at the Topeka Mind Body Spirit Fair, this little statue shouted at me. Yes.. I was to be hers… LOL it was time.

I brought her home and set her in my yoga room and welcomed her. The next morning, during the meditation part of my yoga, I googled her. (Hey!! *shrug* No )

That is when I found out she wasn’t the Goddess of Patience.. *wry grin* She was the goddess of Mercy and Compassion.. but that is only LOOSELY the english translation. In all honesty, she likely is the goddess of the Empath.

“It is unfortunate that Buddhism’s most enduring (and universal) contribution to the world has been insufficiently translated as compassion. The original Sanskrit word is ‘karuna,’ which holds within itself traces of the fragment ‘ru,’ meaning to weep. While the Oxford dictionary describes compassion as pity bordering on the merciful, karuna is actually our ability to relate to another in so intense a measure that the plight of the other affects us as much as if it had been our own.

“The term karuna is central to the entire Buddhist tradition. It is frequently described as a love for all beings, equal in intensity to a mother’s affection for her child. However, it is quite unlike conventional love (Sanskrit: priya, kama or trishna), which is rooted in dualistic thinking and is egoistic, possessive and exclusive, in contrast to the all-encompassing nature of compassion. The root meaning of karuna is said to be the anguished cry of deep sorrow and understanding that can only come from an unblemished sense of oneness with others.”

As I continued to read the article, I was astounded by her love of Willow Trees. I had already told my hubby that I wanted my ashes to be buried as a Willow Tree, since you can do that now. I’ve always wanted a willow tree, but people (my fav college roomie and Certified Horticulturist, and a friend who did some yard work for me..) say that they are horrible to care for and destroy yards and stuff. *sigh* Anyway, I definitely have always had an affinity with willow trees. There is a memorial willow tree in the park behind my house. My son and I used to visit often, when he was willing to go for walks.

I believe also, that she is a balance of masculine and feminine. It is said that she started as a male god, but transformed into a female goddess. I have a lot of male tendencies but over the past 15 or so years, I’ve tried to work on my female side (HEY! I became a Mom, I might as well learn how to be feminine) Okay, so I never quite reached the girly girl stages, still prefer jeans (unless I’m out at Camp Gaea, then I love my sarongs) and t-shirts. I love being comfortable. I don’t like trying to be something I’m not. I like the straightforward folks and I’m downright blunt, but .. I’ve gotten softer. I’ve been known to cuddle my son. I discovered the word “huggles” which for me, I hope shows a softer side.. especially when I have to be a hardass in my empath support group.

I’d also like to note that the merchant, being as merchants are, decided to show me a Kuan Yin Oracle… and I couldn’t resist that either.
Below you will see the results of the first card I drew….

Kuan Yin, in her Temple of peaceful Jade, causes all conflict to elevate to higher peaceful resolution. A resolution and healing of any situation that is concerning you is already underway. In fact, you are being asked to begin to feel the relief of that resolution now, so you can more readily receive the divine solution and blessing of peace from the beloved Kuan Yin when it arrives. 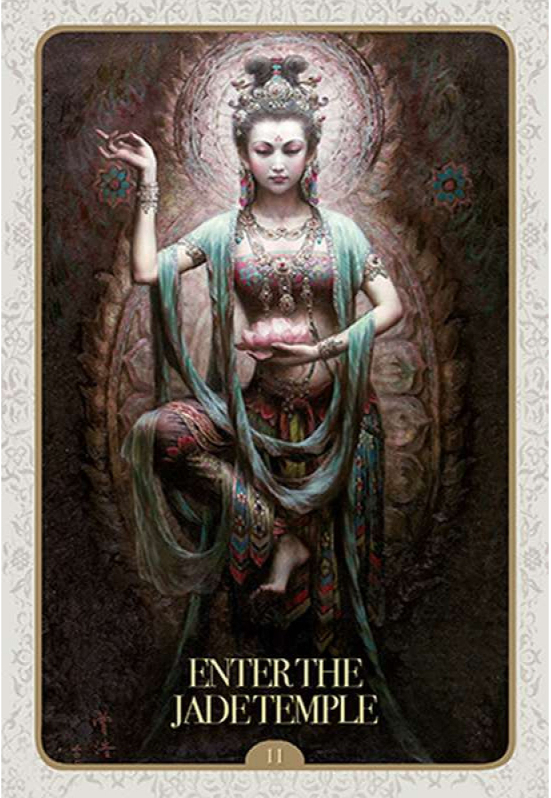 There are moments on the Path where conflict arises and struggles emerge. These conflicts may be within us or appear to be in an external relationship or situation. This can be part of the experience of life on the physical plane that actually help us raise our vibration to find unity and yet still honor our individuality.
There is a spiritual light within, a light of Peace, that can be brought to bear on any situation or struggle, an energy of peace that can transform even the deepest conflict through blessings of the divine goddess, Priestess of the Jade Temple, Kuan Yin.
Peace does not mean avoiding conflict or pretending that struggle does not exist. Peace is the light that flows when we are able to step above the illusions of separation, competition and conflict, to seek out the consciousness where we are in fact all one in Divine Love and we are all serving the Path of Light – in our own unique ways – together. The energy of such a high level of genuine consciousness is transformative. It allows us to surrender judgment and to release any need to prove ourselves or our worth to another. Instead we can just live our lives and allow others to do the same with more peace in our hearts. Conflict becomes an opportunity to grow more in inner peace and loving acceptance of all paths, to learn detachment and to trust.
It takes a mature Soul to call in peace because is is not a way to avoid conflict, it is a way to use conflict as a spiritual tool through which to grow and become bigger than the conflict, to make allowance for each being to choose their own way to grow and to call forth the spiritual genius of the divine that is able to provide solutions that can bring peace to all.
The Divine Goddess speaks to you now and says that your resolution is assured. Have faith, be prepared to surrender your viewpoint and receive a new one that will serve you and bring you to peace at a higher level of reality. It is no longer about right or wrong, it is now about stepping up into peace and resolution, more joy and more delight! You are so capable of this and you will enjoy the wonder of the healing process as you surrender into the Jade Temple, the place of peace over which Kuan Yin presides as Priestess and Guide. She bestows healing blessing on your life situation now. This oracle is confirmation that if you have been struggling, a time of respite and peace is on its way to you swiftly now.

Now that my quest for understanding Michelle’s portrait from nearly 7 years ago, I need a new one to start my next level of enlightenment. Hopefully I’ll be able to catch her at the 2017 Heartland Pagan Festival!