Tonight, I pulled another card.
I got the Moon.

The Moon calls your attention to your shadow, becoming consciously aware of any tendencies to project fear and anxiety onto your external surroundings, and turning it around into more positive and constructive energy. 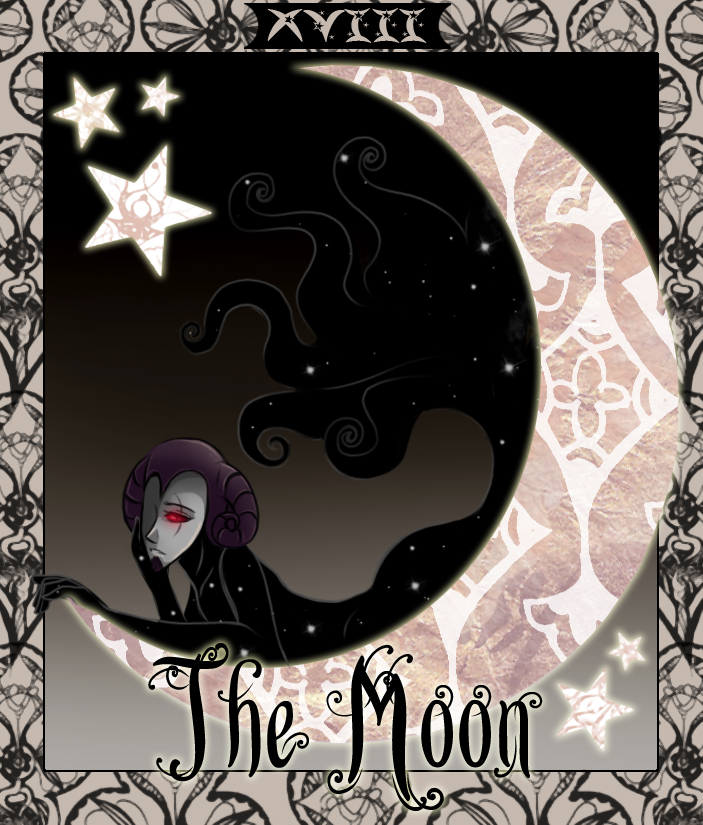 The Moon is a psychological card of projecting fear into your present and your future, based on past experiences. The images, thoughts and feelings that you have repressed over time cause inner disturbances that are becoming overwhelming. As a result, you are now experiencing negative blocks within your personality, causing fear and anxiety. To remedy this, you need to go through a purging process whereby deep memories are released. This is a time when you need to go deep into your soul and dredge up your anxieties, fears, psychic blocks and personality disturbances. Many invisible things are coming to the surface including secret motives, clandestine information and ancient hidden truths. These newly discovered resources may confuse you but once they are brought to your awareness, they will no longer haunt you.

The Moon is a card of illusion and deception, and therefore often suggests a time when something is not as it appears to be. Vigilance and clear perception will be necessary to find that which is hidden before it is too late. If other cards in the reading are negative, then the Moon shows that not all is as wonderful as you would think and there are still hidden forces at play that may unravel your success. You may be idealising the situation, and ignoring the fact that potential for failure exists among success. If the other cards are generally positive, then the Moon suggests that you are letting your imagination run away with you, and that things are not nearly as bad as they seem. In both cases you must open your eyes and see what it really going on. Guard against accepting illusions as they may cause an error in your judgement.

Oftentimes, the Moon appears in a reading when you are not sure of your destination, or even of the path you are travelling but you travel nonetheless. You may have lost your way and are now left to walk in the dark, guided only by your inner light and intuition. You need to go on without a clear picture of where you are, where you are going or where you have been. The Moon is a card of intuition and psychic forces, so let go of your conscious mental blocks or negative self-talk, and allow your intuition to guide you. Your dreams, intuitions, and inner promptings lead you forward toward higher levels of understanding if you listen carefully and use your judgement to help interpret the veiled messages of the unconscious. Not only will the way forward be revealed but in many cases you will learn lessons about yourself that will be valuable in later journeys.

Creating a plot for a story Tarot Spread

Negativity is impacting my health