The truth about Project Pagan Enough

I subscribe to the blog called Inciting A Riot, and I read her stuff often.

Yesterday she had a blog about another blogger disagreeing with the basics of Project Pagan Enough.

Project Pagan Enough is defined as “movement to raise awareness in the pagan community about our treatment of one another in public, online, one-on-one, and any other time we are faced with talking to, about, or meeting with other pagans.”

And the Great Tininess responds with why they hate Project Pagan Enough:

“Paganism” is meaningless. If it is possible for anyone who believes anything and does anything to be “Pagan Enough”, Paganism is a so-called “religious tradition” that has neither set beliefs nor set practices and therefore cannot be viewed as any sort of religious tradition at all. By the parameters of Project Pagan Enough, anyone that has ever lived is “Pagan Enough,” including all Christians, Muslims, Jews, Buddhists, Jains, Hindus, Sikhs, Scientologists, Raelians, or Atheists. Anybody.”

Why yes, TGT, paganism IS meaningless. Why must we fit into any definition. We are all pagans because we should be allowed to beliweve what we want, what we feel and who we are. Why does any of it need to be defined? We do we need to fit into anything? Why can’t we be outside the box?

Fire Lyte is starting a movement. I’ve done my own little thing, trying to start Patchwork Pagans, which hasn’t really taken off yet.. but it is meant to be a meetup.com for pagans. ALL pagans.

I AM Pagan Enough 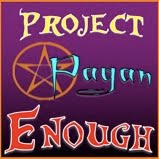 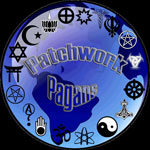 As you can see, our logo is for all religious. ALL religions are pagan and if we can unify all religious beliefs under something, there will be fewer issues between them. Perhaps we are dreaming big, but seriously, what do we have to lose. Why can’t we all get along? Why can’t there be hope for ALL religious to at least accept the other one’s systems.

And why HATE a project for trying?

In addition to that, I want to hook PaganHuggles with the Patchwork Pagans so that there can be a place to blog, share pictures, stories, experiences, etc.

“Project Pagan Enough is an immature attempt to solve immature problems. I hope that those who have engaged in this “riot” will further examine their own choices and their relationship to Paganism and begin to ask why it is that they have involved themselves with something that they themselves assert to be ultimately baseless. I hope that others will look at Project Pagan Enough and see in it an excellent example of the real problems facing contemporary Paganism, and that they will work toward a deepening, rather than a shallowing, of Pagan discourse.”

Ouch. Not just a small slam, but a HUGE slam. Why attack the maturity level? At least she is trying to do SOMETHING! I mean, how many people think of good ideas but never put them into play. Seriously, any steps are a good step in making a change. Bringing people together. Understanding and most important of all, tolerance.  What is wrong with working towards a goal of tolerance?

Fire Lyte posted a response in the comments as well as in her blog. She invited the Great Tininess, Johnny Rapture, to be interviewed on her PodCast.

“As an extension of respect, I cordially invite you (oh Great Tininess writer) to be a guest on Inciting A Riot: the Podcast. I don’t know if you actually spent any time at all on IncitingARiot.com, but I also have a show. It’s currently resting at number 1 on Podcast Alley in the Religion & Spirituality category. I have a rather large listener and reader base and I’m sure they would leave to hear a counterpoint to the ideals and rationality of Project Pagan Enough. I am quite excited to hear more of how this little project of mine is full of middle school logic and immature rhetoric.”

I would love to see this happen. Perhaps a greater understanding could be gained from such an endeavor, for both parties!

But for now, as I’ve meant to do for a while, I’m taking the pledge and adding the image and link to my rotating content box at the top of this page.

1.You are pagan enough, despite how you look, act, smell, dress, believe, or are.
2.You recognize that others are pagan enough despite their appearance, smell, manner of dress, belief, practice, or other aspect.
3.You recognize that you can have an academic debate on the finer points of belief or practice, but that it does not take away from someone else’s level of being pagan.
4.You welcome, befriend, and encourage others in the pagan community despite their appearance, dress, or other physical or superficial characteristic.
5.You promise to treat members of other faiths, despite the faith, with honest-to-goodness fairness, equality, and grace, not judging them or their faith based on the actions of fringe members of their same faith.

By the grace of the goddess, I do so swear:

I finally listened to the debate.