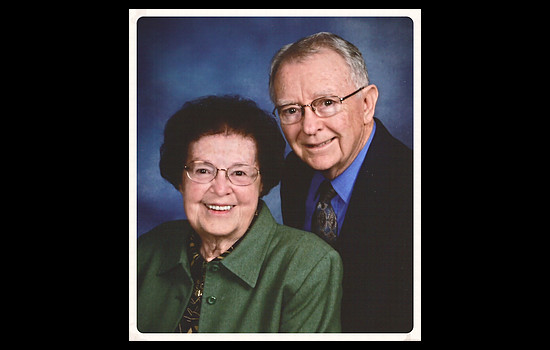 Ron and Marlene had their first date on April Fools Day. They met for dinner at a Chinese Restaurant in Salina.

Ron and Marlene were married October 24, 1964 in Wilson, KS. They were longtime residents of Ellsworth where they were owners of F&M Healthmart. Ron was a pharmacist having received his degree from the University of Kansas. Marlene was the office manager taking care of all of the administrative duties at the pharmacy. She received her degree from Kansas State University. They were members of the St. Bernard’s Catholic Church, Ellsworth where Ron was also involved with the Knights of Columbus and Marlene was actively involved in numerous church committees. In the last few years, they had moved to Manhattan, KS where they were active in the St. Thomas More Catholic Church.

Ron and Marlene enjoyed traveling around the US and the world and going on adventures together. They traveled to Germany to meet their newborn grandson in 2000, and visited Mom’s ancestry country of Czechoslovakia. Their favorite trip was their trip to Rome where they visited the Vatican. Always very active and involved, they devoted their time to Catholic organizations.

Memorial contributions may be made to Catholic Charities Adoption Services, c/o Parsons Funeral Home, PO Box 45, Ellsworth, KS 67439 or at by clicking here.

Leave a condolence for the family below.