Today I am honored to highlight a guest blogger.

The following blog was written by Anuj Sehgal and he gave his permission for me to share it here.
Thanks Anuj!
*huggles*

The names of many of hells is common in Hindu texts, however the nature of sinners tormented in particular hells varies from text to text. 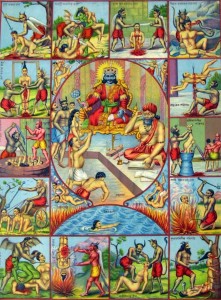 The summary of twenty-eight hells described in the Bhagavata Purana and the Devi Bhagavata Purana are as follows:[2][3] Tamisra (darkness): It is intended for a person who grabs another’s wealth, wife or children. In this dark realm, he is bound with ropes and starved without food or water. He is beaten and reproached by Yamadutas till he faints.[2][3] Andhatamisra (blind-darkness): Here, a man – who deceives another man and enjoys his wife or children – is tormented to the extent he loses his consciousness and sight. The torture is described as cutting the tree at its roots.[2][3] Raurava (fearful or hell of rurus): As per the Bhagavata Purana and the Devi Bhagavata Purana, it is assigned for a person who cares about his own and his family’s good, but harms other living beings and is always envious of others. The living beings hurt by such a man take the form of savage serpent-like beasts called rurus and torture this person.[2][3] The Vishnu Purana deems this hell fit for a false witness or one who lies.[4] Maharaurava (great-fearful): A person who indulges at the expense of other beings is afflicted with pain by fierce rurus called kravyadas, who eat his flesh.[2][3] Kumbhipaka (cooked in a pot): A person, who cooks animals and birds, is cooked alive in boiling oil by Yamadutas here for as many years as there were hairs on the bodies of their animal victims.[2][3] Kalasutra (thread of Time/Death): The Bhagavata Purana assigns this hell to a murderer of a brahmin (the Hindu priestly caste),[2] while the Devi Bhagavata Purana allocates it for a person who disrespects his parents, elders, ancestors or brahmins.[3] This realm is made entirely of copper and extremely hot, heated by fire from below and the red hot sun from above. Here, the sinner burns from within by hunger and thirst and the smouldering heat outside, whether he sleeps, sits, stands or runs.[2][3] Asipatravana/Asipatrakanana (forest of sword leaves): The Bhagavata Purana and the Devi Bhagavata Purana reserve this hell for a person who digresses from the religious teachings of the Vedas and indulges in heresy.[2][3] The Vishnu Purana states that wanton tree-felling leads to this hell.[4] Yamadutas beat them with whips as they try to run away in the forest where palm trees have swords as leaves. Afflicted with injury of whips and swords, they faint and cry out for help in vain.[2][3] Shukaramukha (hog’s mouth): It houses kings or government officials who punish the innocent or grant corporal punishment to a Brahmin. Yamadutas crush him as sugar cane is crushed to extract juice. He will yell and scream in agony, just as the guiltless suffered.[2][3] Andhakupa (well with its mouth hidden): It is the hell where a person who harms others with the intention of malice and harms insects is confined. He is attacked by birds, animals, reptiles, mosquitoes, lice, worms, flies and others, who deprive him of rest and compel him to run hither thither.[2][3] Krimibhojana/Krimibhaksha (worm-food): As per the Bhagavata Purana and the Devi Bhagavata Purana, it is where a person who does not share his food with guests, elders, children or the gods, and selfishly eats it alone, and he who eats without performing the five yajnas (panchayajna) is chastised.[2][3] The Vishnu Purana states that one who loathes his father, Brahmins or the gods and who destroys jewels is punished here.[4] This hell is a 100,000 yojana lake filled with worms. The sinful person is reduced to a worm, who feeds on other worms, who in turn devour his body for 100,000 years.[2][3] Sandansa/Sandamsa (hell of pincers): The Bhagavata Purana and the Devi Bhagavata Purana state that a person who robs a Brahmin or steals from someone jewels or gold, when not in dire need, is confined to this hell.[2][3] However, the Vishnu Purana tells the violators of vows or rules endure pain here.[4] His body is torn by red-hot iron balls and tongs.[2][3] Taptasurmi/Taptamurti (red-hot iron statue): A man or woman who indulges in illicit sexual relations with a woman or man is beaten by whips and forced to embrace red-hot iron figurines of the opposite sex.[2][3] Vajrakantaka-salmali (the silk-cotton tree with thorns like thunderbolts/vajras): A person who has sexual intercourse with animals or who has excessive coitus is tied to the Vajrakantaka-salmali tree and pulled by Yamadutas so that the thorns tear his body.[2][3] Vaitarni/Vaitarna (to be crossed): It is a river that is believed to lie between Naraka and the earth. This river, which forms the boundary of Naraka, is filled with excreta, urine, pus, blood, hair, nails, bones, marrow, flesh and fat, where fierce aquatic beings eat the person’s flesh. As per the Bhagavata Purana and the Devi Bhagavata Purana, a person born in a respectable family – kshatriya (warrior-caste), royal family or government official – who neglects his duty is thrown into this river of hell.[2][3] The Vishnu Purana assigns it to the destroyer of a bee-hive or a town.[4]

A most miraculous and beautiful message — From Dad

6 thoughts on “Hindu Types of Hell”