Why You Will Never Be The Same After Living in Germany

1. No Beer Festival Will Ever Compare

Admit it, Germans know how to do Beer festivals better than anyone else in the world! After going to Oktoberfest or any other beer festival in Germany, all others will seem boring compared to that time you went to Dult!

2. Schloss Neuschwanstein will make you feel like a Disney Princess

There aren’t many castles that compare to the magnitude of beauty that inspired Walt Disney to add the image of the castle before every Disney movie. All your dreams will come true here!

3. Once you go German beer, there is no going back to American beer

There are many good beers and Microbreweries in the States, but nothing compares to that wheaty Weizen from Germany or that Bockbier from Bavaria that will make it difficult to go back to that Coors Lite or Budweiser. Once you go Bock, you never go Back!

Want to step out of your cement city and into a real life Medieval story book? Then try a weekend inRothenburg ob der Tauber and walk the city walls of a Medieval fairy tale. 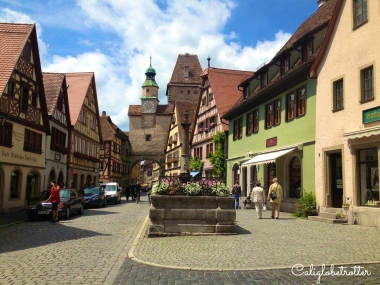 5. Not a beer fan? Then nothing could possibly be more romantic than a boat tour down the Rhine river through the wine valley or a day trip to Würzburg

Sometimes there is nothing better than enjoying a glass of wine on the Old Main Bridge watching the river flow underneath you while enjoying a beautiful view of the Fortress Marienburg or enjoying the rolling hills of vineyards, sipping on wine cruising down the river.

6.Because the magic of Christmas doesn’t come alive until you have gone to multiple Christmas markets throughout Germany

There is something truly magical around strolling the aisles of Christmas market stands with someone special as it starts to snow and the Christmas trees are beautiful decorated.

7. In fact, the only thing to make strolling the Christmas Markets even more special is a cup ofGlühwein keeping your fingers toasty warm

8. You will never experience the freedom of the road again after having driven on the Autobahn

There is something truly liberating and exciting in a school girl squeal kind of way about hitting 150mph in a car on the Autobahn.

9. Nowhere else will ever be as beautiful in the Fall as Germany

Fall is my favorite season in Germany as the trees change from thriving, full green branches to colorful canvases of art that paint the entire country.

10. You just can’t get a good schnitzel anywhere else but in Germany. Anything else is just pure imitation.Unless you’re in Austria.

Unless you are a cook, were taught by a German or a German cooks for you, don’t bother attempting to make/eat a schnitzel because it just won’t be the same as having the real deal.

11. Nothing will awe you more that the endless views Germany’s highest peak offers from the top ofZugspitze

Be prepared to be blown away. Literally.

12. The German language may not be the “Language of Love” but it will teach you to speak more directly instead of beating around the bush.

Germans don’t know how the beat around the bush even if the bush were to prick them in the bum! Americans could learn a thing or two about getting directly to the point!

13. Germany will teach you to embrace your inner-strange, especially when it comes to any form of art.

14. If you weren’t a coffee drinker before, you will surely leave a coffeeoholic

Nothing is more enjoyable than taking a few hours of your week to meet up with friends over a coffee and cake in some adorable café that will make the burdens of work fall away with every sip.

15. You will treasure you Sundays like a kid who found $100 on the ground

Germans are incredibly proud of their NO-working Sundays and you will eventually learn to accept that everything is closed on Sundays and begin to appreciate the German’s reluctance to change.

16. Feeling the glory of standing in front of the Brandenburg Gate in Berlin and understanding how it once divided a nation.

17. Bread & pastries will never be the same again

Nothing like grabbing a quick Brot to snack on during your Brotzeit Pause. German bread goes perfect with that German salami as well, which you just can’t duplicate.

18. The endless amounts of swans in the lakes and rivers

19. Germany itself. How could you not fall in love with Germany in general!? You’d be crazy not to!