Not everyone on earth is from earth. There are those who are here from other planets and civilizations in this and other universes. And though they walk around in human bodies, in truth many have forms that are not human.

Many starseeds feel that this is true, but they don’t have information available to them to confirm it. Many are drawn to animals and other life forms on earth that, in fact, closely resemble their true form. For instance, some are very drawn to dolphins and there is a race of Beings called the Nommos who live on a planet in the Sirius star system.

There are other factors indicating a starseed identity. Here is a list of a few of them.

1. They have an intense sense of loneliness.

2. They feel like they don’t belong in their earth family.

3. They have a fascination with the stars and feel as though their home is out there, but they can’t remember where. 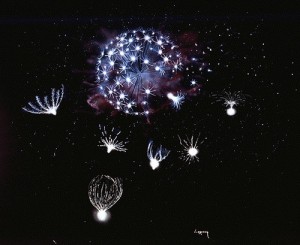 4. They begin to question the ways of earth at an early age. Many are the black sheep of their family.

5. They are drawn to metaphysics seeking answers to why they feel so alone and why they don’t seem to fit in on earth.

6. Many have an adversarial relationship with the parent of the opposite sex.

7. The majority of starseeds have the facial shape of their mother but the remainder of their physical body is like that of their fathers, or the other way around depending on which parent is the real parent, the starseed parent from off planet. This is done for a reason.

8. The majority of starseeds carry the Crystal Gene for DNA Recoding/Ascension. The crystal gene enables them to easily channel and access beings on other dimensions as well as recode their DNA.

9. Lower than normal body temperature and inability to handle heat.

The starseed child looks more like the earth father to ensure that they are accepted by that parent at birth. In the majority of cases the real father of the starseed is not of human origin.

Starseeds are here on earth as representatives of their civilizations. Their purpose is to create templates that can be used by the members of their home world to overcome some societal problem that hinders their spiritual evolution as a soul group.

I am told that 144,000 civilizations have sent some of their people to earth as starseeds. These civilizations closely watch their beloved children while here on earth. The real parent, the starseed parent, is usually a guide for his child while that child is on earth. It is my understanding that this is why so many starseeds have experienced visitations from an early age. Their family on their home world uses many ways to communicate and maintain the connection and love bond with their family member on earth. This is also why so many civilizations have ships orbiting earth right now. They have family here and therefore have a vested interest in seeing that earth ascends.

Walk-ins are people from other dimensions who have walked in to the body of a person here on earth. In all cases there is a contract made before the host, the original soul, is born for this to occur.

Walk-ins use this method to enter the earth plane when their mission requires that begin soon after they arrive. Their mission necessitates they skip the birth and adolescent stage and come into an adult body. This is not always the case. Some walk-ins come into much younger bodies, but this is more the exception than the rule. When a child walk-in occurs, it is because the soul coming in needs the experiences of childhood and adolescence as a foundation for their mission. Childhood and adolescent walk-ins usually don’t awaken until they reach adulthood.

Indications of a walk-in are:

1. Usually occur during a traumatic event in the host soul’s life such as a severe illness or a car accident. Many come in during a near death experience. This is the most common way for walk-ins to exchange places, but it is not the only way. Yet, most all cases the walk-in occurs when the host is unconscious.

2. They all of a sudden, have little or no connection with some family members.

3. Divorce occurs usually within 3 years after the walk-in has arrived.

4. Ongoing physical pain in the neck and shoulders that wasn’t there before the walk-in.

5. Loss of coordination and memory lapses. Trouble with speech.

6. Sudden change in tastes such as food, clothing and decor.

7. Sudden loss of interest in career and hobbies. New ones are found along with a sudden interest in all things spiritual.

8. Strong knowing that they have a mission to accomplish though they may not remember what it is at the present time.

9. Some walk-ins have memories of their home world or ship. They even have memory of their incarnate forms being sustained through a form of cryogenics (spelling?) that is far superior to ours.

Walk-ins have a more challenging role on earth because they have spent most of their incarnation on another plane of existence and then come to earth in the middle to later part of that incarnation. Click here to read about Jelaila’s walk-in experience.

Lightworkers are people who have chosen to seek spiritual knowledge and have made the choice to do their part to assist Earth and Mankind in their ascension.

Lightworker is a term given to those who are actively on the spiritual path. Not all Lightworkers are starseed or walk-ins and not all starseeds and walk-ins are Lightworkers. It is when the individual makes the conscious choice to begin their spiritual path and assist others that they become a Lightworker.

How To Know If You’re An Indigo, Crystal Or Rainbow Child

The Way of the Indigo Warrior

2 thoughts on “Starseeds, Walk-Ins and Lightworkers”